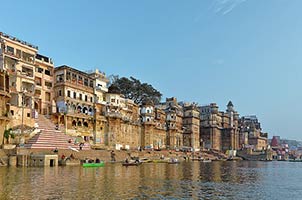 India is a place like no other. There the veil between the physical plane and the deeper reality is very thin. And in the more holy places, it is much easier to touch the formless unity that permeates and sustains all of creation.

I often envision leaving my current life behind and starting anew in India. Writing the remaining books would be much easier while immersed in the formless.

It may not be my fate to live in India. We’ll have to see. In the meantime I’ll stay in San Diego. It’s nice living close to the ocean.

Today India is on my mind more than usual. I remembered a scene from the movie The Curious Case of Benjamin Button. In it the main character has written a letter to his daughter. As she reads the letter you see clips of his life in India. In one of the clips he is riding in a boat on the Ganges River in Varanasi. And in another he is washing his clothes in the river. In the background, I saw a building that was similar to the one I stayed in many years ago.

Here is what the main character wrote to his daughter:

“For what it’s worth, it’s never too late, or in my case too early, to be whoever you want to be.

There’s no time limit. Start whenever you want.

You can change or stay the same. There are no rules to this thing.

And I hope you see things that startle you.

I hope you feel things you have never felt before.

I hope you meet people with a different point of view.

I hope that you live a life that you’re proud of. If you find that you’re not, I hope you have the strength to start all over again.”