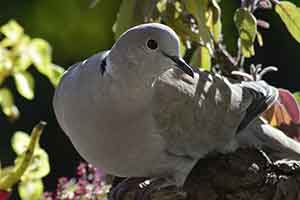 I am also reading David Godman’s biography of Papaji entitled Nothing Ever Happened. Papaji attained liberation with the help of Ramana Maharshi.

Both men taught the spiritual practice of self-enquiry. A seeker focuses on the source of the “I” (or ego) in order to draw his attention inward. When the “I” temporarily drops into the Self the mind becomes still. And when the “I” recedes into the Self permanently he attains liberation.

The enlightened presence of both Ramana Maharshi and Papaji are present in their books. And while reading them my mind becomes still and my awareness is drawn within.

During the evening I ran along the beach and then walked back to the car along the sidewalk that overlooks the ocean. While passing by a large condominium building, I heard a dove calling. I looked and found the dove sitting on a cement wall about fifteen feet away.

I have heard a dove calling at this spot in the past. Usually it happens after sunset and too dark for me to see the dove. Tonight was different because the sun had not yet set and there was plenty of light.

The dove was beautiful. I thought that it was probably one of my guardian angels. I directed the Paramatman light into the dove. Within a few seconds the dove’s energetic body responded, and I knew it had received the light. A lot of people walk on the sidewalk at this time of day so I didn’t want to linger in one spot staring at the dove. After two minutes, I put my hands together and raised them to the third eye in gratitude for encountering this being. Just then my “I” descended into the Self. I turned and walked back to the car, noticeably affected by the experience.

The mind became more still and I was unable to talk. I hoped that the state would be permanent, but it lasted only ninety minutes. Hopefully, the “I” will one day recede into the Self and not rise again. That will be a very good day.