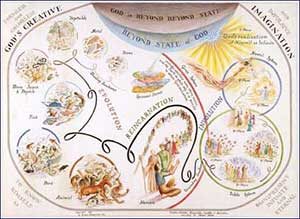 In his book God Speaks, Meher Baba explains that everything in our physical world comes into being first as an idea of the infinite intelligence. The ideas give rise to energetic forms that then become the basis of physical forms.

The vast majority of people on the planet perceive only the physical plane of reality. And according to Meher Baba, the spiritual journey begins when a person learns to perceive the energetic plane of reality.

If you begin to feel or see various energetic forms, do not allow yourself to become distracted by them. Keep your attention on the deeper reality. And do not allow the ego to use your abilities as a way of strengthening itself. The ego will attempt to claim everything for its own, including your own spiritual abilities. Remember that you will make true spiritual progress through the gradual dissolution of the ego. And only when the ego is destroyed does the false sense of separateness disappear leading to liberation.

Each seeker’s path is unique. Yet the seekers that take the quickest path to liberation are guided by an enlightened master that keeps them on the straight and narrow.