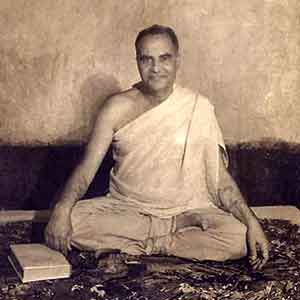 Japa is a spiritual practice in which a seeker repeats a mantra. The repetition of the right mantra gradually dissolves your past conditioning and weakens the ego.

Papaji is a modern enlightened master who lived in the twentieth century. He practiced devotional japa to Krishna for twenty-five years. His japa practice dissolved his ego, what he called the sense of “I.” Yet it wasn’t until he met Ramana Maharshi that he attained liberation.

The book Nothing Ever Happened is a biography of Papaji’s life. In it Papaji’s describes the stages that a seeker goes through when practicing japa. It is the best explanation of japa that I have found from any enlightened teacher.

According to Papaji, it is necessary to have an aspect of devotion to God or an enlightened master in order to empower the mantra. A mechanical repetition of a mantra is not useful.

In the beginning you repeat a mantra using the voice. In the second stage you repeat the mantra in the mind without saying it out loud.

During the third stage you learn to synchronize the mantra with the breath. And eventually the mantra and the breath become one. The mantra is repeated automatically, without your conscious attention. It takes place when you are awake and when you are dreaming.

In the last stage you become aware that the mantra is arising from the Heart—the formless unity from which the “I” arises. And the sound of the mantra subsides into the silence of the formless.

In the biography, Papaji gives several examples of saints (such as Gandhi) who repeated the name “Ram” as their japa. And the spiritual progress they made seems to indicate that repeating a name of God is a useful practice. Yet Papaji does not recommend japa as a spiritual practice.

Papaji had a unique teaching style. He told seekers to keep quiet and not do anything. You should not have any kind of spiritual practice. And you should reject any thoughts that arise in the mind. Any activities or thoughts keep you focused on objects and distracted from the Heart.

Papaji claimed that a seeker could not attain liberation through any kind of effort. The only way is through the grace of an enlightened master. Only in his presence can your sense of “I” be pulled into the Heart, never to rise again.

Papaji believes that he could have attained liberation at a much earlier age, and avoided the twenty-five years of japa, if he had once asked himself, “Who Am I?” This is the question that a seeker asks as part of self-enquiry, the spiritual practice taught by Ramana Maharshi.

My Take on Japa

The spiritual journey takes place across multiple lifetimes. Each person incarnates at a different stage of their spiritual development.

Papaji was a spiritually-advanced soul who was going into samadhi in prior incarnations. He was born being very close to the goal of liberation.

Most other people are not so fortunate. They still carry vast amounts of accumulated karma which causes thoughts and desires to arise in the mind.  It is not a simple thing for them to be quiet and not doing anything, as recommended by Papaji.

My feeling is that effort is required for a certain portion of the spiritual journey. A seeker has to find a way to train the mind so it is not distracted by incessant thinking and can instead focus on the formless unity. Japa, as well as other practices such as meditation and self-enquiry, seem useful in connecting with the formless and dissolving vast amounts of accumulated karma.

While reading Papaji’s biography, I decided to try japa again by repeating the name “Ram.” The results were unexpected. When the name Ram appears in the mind my attention is quickly drawn inward—I can feel the “I” descending into the Heart. I am only able to mentally repeat the name one or two times. And then my awareness is so deep that I can no longer create any words, including Ram, in the mind.

Unfortunately, the state is only temporary. Within a short while, my attention becomes absorbed in some object and thoughts begin appearing once again in the mind.

I have tried using other words in a mantra such as: Om, Meher, Krishna, or Jesus. And the results are the same.

The ability to quickly draw my attention inward is a spiritual breakthrough. Perhaps reading Papaji’s biography, which contains interviews with him and many of his letters, has allowed some of his grace to flow to me. And perhaps the encounter with the angel earlier this month also contributed to my current state.

Papaji’s spiritual story may provide a hint as to why I’m unable to repeat a mantra more than a few times. Near the end of his spiritual journey Papaji had a vision of Rama, Sita, Hanuman, and Lakshman. Afterward he was no longer able to repeat the name of Krishna. He visited Ramana Maharshi who told him that the mantra had served its purpose and was no longer needed. At which point Papaji’s “I” receded into the Heart permanently and he attained liberation.

I don’t yet understand this breakthrough. It is probably just a step forward on the long journey to liberation that we all must travel. If I’m fortunate then the end of the journey is near, but that is too much to hope for. It is wise not to get carried away with delusions of grandeur, as so many seekers tend to do.

Papaji said that only an enlightened master can grant liberation. And he also said that some enlightened teachers have the power to help others to awaken and some do not. I may need to find one that has the authority to push my “I” into the Heart with such a force that it never arises again.