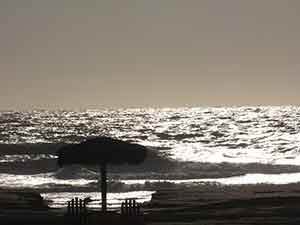 I just returned from the beach. I needed that. It has been a challenging day. And meditating at the ocean allows me to reconnect with the deeper reality

The sun is setting late this time of year. I have made a habit of working till around 7 pm and then going to the ocean to watch the sunset.

I am still dehydrated from yoga class last night. So I didn’t feel like jogging. I walked south along the boardwalk for a mile and a half. It is packed with people enjoying the warm weather on the weekend.

It took more effort than normal to get into the walking meditation. I turned my attention to Meher Baba and tried to perceive him as the universal consciousness within everything. The heart opened and I could feel his love and grace. Then I focused on the source of the “I” thought and felt myself come into alignment with the Self. Meher Baba’s grace and the Self combine in a unique way that is a wonderful place to be.

After watching the sunset, I decided to jog for a while. The exercise woke me up and helped to heighten my awareness. After about a mile, I decided to walk the rest of the way.

Walking back to the car is my favorite part of going to the ocean. When the sun sets the universal energy shifts from yang to yin. And because I have been at the ocean for a while my system is still and balanced. And so the walking meditation is deeper.

I found myself focusing on the ocean waves. The boardwalk is elevated high enough to see the curvature of the earth. The remaining light from the sun and the clouds in the sky made the ocean look silver in color.

Suddenly I remembered the vision that occurred yesterday morning. Meera is in India this week. I woke up earlier than normal, in time to meditate during her daily darshan. While lying in bed, I rested in a state between being awake and asleep. An image appeared in my awareness that I have never seen before. It was a silver ball made of water. The water flowed down the ball in ripples that looked like tiny waves. The image was so real that I tried to open my eyes in order to get a better look at it. But when my eyes opened the image vanished.

It seems that I am being directed to continue my nightly visits to the ocean. I look forward to it.