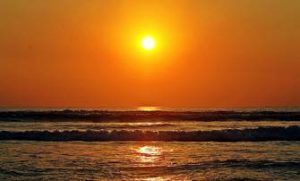 Mother Meera darshans in Germany today. After they were over, I shut my eyes for a while to take a nap. Taking a break during the day gives me enough energy to continue writing on the book. Instead of falling asleep, I had two visions of the ocean at sunset.

These brief samadhi experiences happen occasionally in the state between wakefulness and sleep. They usually occur while Mother Meera is giving darshan, and they almost always involve some form of nature such as the ocean, a tree, or the night sky. The image varies based on which form of nature I have been focusing on recently during my standing meditations.

Lately I’ve been performing the standing meditations on my balcony at sunset. Last night I went to the beach to watch the sun disappear into the ocean. I should make a habit of going to the ocean more often, especially around sunset. Being close to the ocean helps to draw my awareness into the deeper reality.

This morning I searched for a video of Ramana Maharshi that I could play in the bottom corner of my computer screen while writing. I find it easier to be creative while videos of enlightened teachers (such as Meher Baba, Papaji, and Ramana Maharshi) are playing. Perhaps the visions today were due in part to watching so many images of Ramana Maharshi, his ashram, and Arunachala Mountain.

Spiritual visions are nice, yet they can also be a distraction. In God Speaks and Discourses Meher Baba discusses the dangers of a seeker getting lost in the energetic planes. Some become so engrossed in visions that they do not focus on the deeper reality and their spiritual progress stalls.

I will make a point of not becoming attached to the visions of nature. And I will continue turning my attention to the divine at every opportunity.