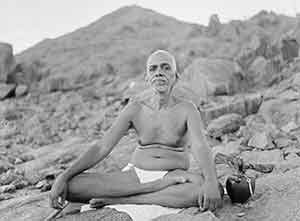 For the last week, I have noticed a different feeling when walking on the beach at sunset and connecting with the deeper reality. It is a sublime stillness in the energetic body and the mind. Until recently the source of this feeling was a mystery.

For several weeks, I’ve been reading Papaji’s three-volume biography Nothing Ever Happened by David Godman. And I’ve also been reading Ramana Maharshi’s book Who Am I? It is a short book that summarizes Ramana’s spiritual teachings. When I finish the book, I simply start back at the beginning and read it again.

Both Papaji and Ramana Maharshi emphasize the spiritual practice of keeping your attention on the source of the “I” thought—the Self that is your true nature. So lately I have been continuously bringing my attention back to the Self that is found within.

After reading Who Am I? so many times it is apparent that my spiritual practice has been deficient. I have too often allowed the mind to focus on objects in the world instead of the formless reality, the Self.

Yesterday I looked at the book cover that has a picture of Ramana Maharshi. And I sensed the same stillness that I am feeling at the ocean of late. It seems that reading Ramana’s book each day has attuned my system to his enlightened presence.

My two favorite enlightened teachings are God Speaks by Meher Baba and Guru Vachaka Kovai by Muruganar. Because I receive a  powerful transmission of grace from reading them.

Muruganar was an enlightened devotee of Ramana Maharshi. Muruganar recorded Ramana’s teachings in short verses, and then Ramana edited the verses. While reading Guru Vachaka Kovai my attention is drawn deeply within at times, so much so that I am unable to speak for hours at a time.

While reading Guru Vachaka Kovai, I became accustomed to perceiving Ramana’s enlightened presence as a deep, powerful stillness. The feeling I receive from reading Who Am I? is different. It is a lighter stillness that is similar to the enlightened presence of Krishna that I feel when looking at his image.

The grace of Ramana Maharshi is present in all of his teachings. By reading them you will attune to his enlightened presence and be drawn into the deeper reality.